The mission of the American Association of University Women (AAUW) is bold –
to advance gender equity for women and girls through research, education, and advocacy.

We are tenacious and trailblazing – advocating for women and girls since 1881 and into the future!

The Crystal Lake Area branch was organized in 1957 and is one of 38 branches in Illinois.

We hope you’ll explore our entire site and come back often.  You can always find our current activities, announcements, priorities on this Home Page. (below)

AAUW Joins With Nation’s Leading Women’s Organizations in Responding to Assault on the U.S. Capitol

The deadly attempt to disrupt the work of the U.S. Congress was the inevitable result of years of hateful and divisive rhetoric. AAUW and other major women’s organizations issue a joint call on Congress to immediately remove President Trump from office.

The program will feature Representative Lauren Underwood (IL-14); topics include her personal story leading to her current role in Congress, and issues related to AAUW’s mission: To advance equity for women and girls through research, education and advocacy.

Contact Us by February 4, 2021 to request your Zoom invitation.

AAUW continues to push forward policies that break educational and economic barriers to women. AAUW’s strategic plan focuses on advancing gender equity for women and girls through research, education and advocacy. The vision is equity for all.

To stay informed on issues supported by AAUW visit Explore the Issues.

Do you want to help advance gender equity and create a more economically secure world for women and girls? Get involved today! 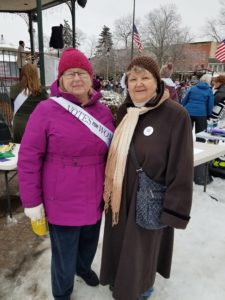 The American Association of University Women (AAUW) is working to close the gender pay gap by 2030!

Join the 10 million women across the U.S. being trained in salary negotiation. Learn how to improve your financial future and secure the pay you deserve.

What is the pay gap?

The difference between what an average woman working full-time is paid compared to the average man. American women earn only 80 percent of their male counterparts, a pay gap of 20 percent. Black and Hispanic women earn even less. Even just one year out of college, women are paid 18 percent less than men.

END_OF_DOCUMENT_TOKEN_TO_BE_REPLACED

The Illinois Women’s Institute for Leadership Training Academy (IWIL) honored organizations that worked on the passage of the Equal Rights Amendment in Illinois.  The event was held on October 18, 2018 at Maggiano’s  in Chicago.  Senator Richard Durbin and other state and local elected officials were also in attendance.  (Senator Durbin’s wife, Loretta, is one of the founders of IWIL)

While several other organizations were honored, Paula Purdue from AAUW was acknowledged as someone who had been working for decades on the issue, one of only three who was asked to give remarks.

Your own Crystal Lake Area Branch was represented at this event.  We all worked in one way or another to get ERA passed in Illinois.  And we will continue to push to get it passed at the national level.  Join us! 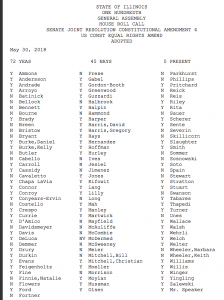 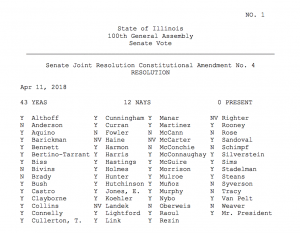